Second workshop of the Metropolis initiative “How can we produce a sustainable airport area?”

This report presents the outcomes of the second workshop held in Atlanta on September 20, 2016. This workshop took place almost one year after the October 2015 Paris workshop. Participants in the workshop included representatives from six international airports (Atlanta, Paris-CDG, Beijing, Dakar, Vantaa, Barcelona), as well as international experts, consultants and scholars from Paris, Atlanta, Hong Kong and Vancouver.

During the previous 2015 Paris workshop, the participants had identified 10 key thematic challenges facing the sustainable planning and development of airport areas.
The main objective of the 2016 Atlanta workshop was to identify and share good practices related to these key challenges. Due to limited time available, the organizers decided to slightly adapt the program and to focus on the following four challenges:

The workshop program also included a visit to the Georgia Resource Center - a world-renowned resource center run by Georgia Power and dedicated to attracting and expanding businesses in the State of Georgia. This presentation was a great opportunity to discuss branding and marketing issues related to airport areas and their surroundings.
On September 22, the participants took part in a business tour of the Atlanta Airport Area organized by the Atlanta Regional Commission (ARC). The business tour, held jointly with the Hubstart International Seminar, included visits to some of the major economic development sites and projects in the Airport Area, such as the new Porsche Headquarters, the redevelopment of the former Fort McPherson military base, the City of College Park and the new terminals currently under construction.

This study is linked to the following theme :
Mobility 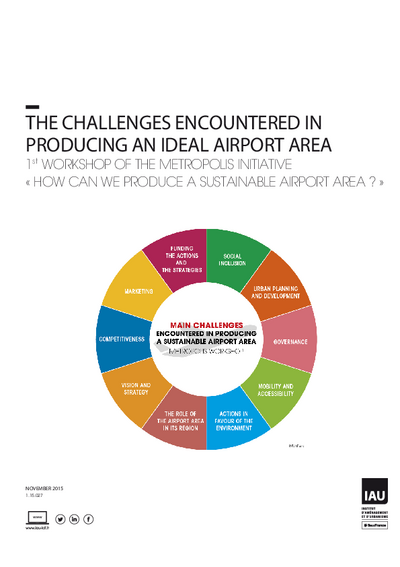 The challenges encountered in producing an ideal airport area