Standing at the crossroads of European and worldwide trade, the Paris Region is Europe’s leading economic region. Consisting of 8 departments and 1,281 municipalities, it hosts a population of 11.9 million (18% of Metropolitan France’s population) that is younger than the national average. The Paris Region has some surprises in store: an appealing land on account of the great diversity in landscapes and in the people and their history, and an attractive land on account of its economic assets, its wealthy heritage and its cultural proliferation.

The region’s GDP is about 31% of the nation’s wealth and close to 5% of the European Union’s GDP, ahead of Greater London and Lombardy. Its deep-rooted industrial tradition can be seen in its dense fabric of SMEs/SMIs and its wide range of activities. The region brings together a strong share of technology companies (major groups, SMEs, start-up companies), world-class competitiveness clusters and one of Europe’s largest concentrations of science and technology.

As Europe’s leading employment area, it boasts a highly qualified workforce. The Paris Region hosts 21% of France’s universities and close to a quarter of all engineering schools (outside universities) and business schools.

In order to boost its appeal, the region has secured top-notch infrastructures. The Paris air hub is continental Europe’s leader: most of Europe’s major cities are within reach of a 2-hour flight. With 70 ports dotted along 500 km of navigable waterways, the region is also the second-ranking waterway platform in Europe. Thanks to its broadband networks, businesses can enjoy technological conditions that will boost their growth.

Lastly, the Paris Region, and the City of Paris in particular, a city of art, history and culture, remains highly attractive to international tourists. For some years now, the Paris Region has been the world’s leading tourist region. Moreover, with almost 700,000 sq m in exhibition space, the region leads the continent in the amount of exhibitors hosted. 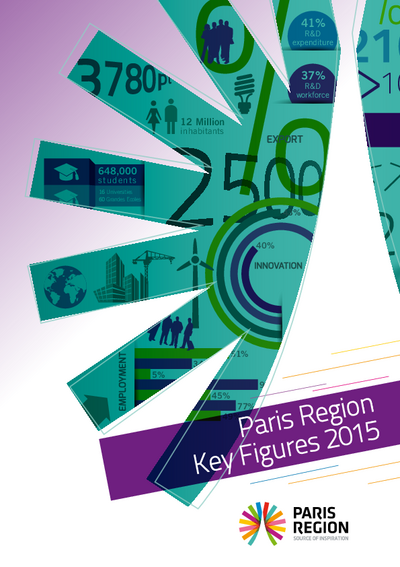 Paris Region Key Figures lays out a panorama of the region’s business and social life, positioning it among the leading regions in Europe and worldwide. It delivers a summary of the key features in the Paris Region, hoping to contribute to the growth of the Paris Region’s ...