Heritage in the Paris region: from the aesthetics of conservation to a forward-planning dynamic approach

The Paris region is rich in both natural and architectural heritage. The locality enjoys a wealth of features both in the form of monuments and sites, recorded and preserved very early on thanks to an appreciation of their value although, at times, necessity has meant reconciling conflicting forces of change.

The State has played a key role in this area. For over one an half centuries it has invested in the protection, restoration, management of heritage which belongs to the nation as a whole.

The combined pressures of the legislator, local managers and public opinion have resulted in significant changes in the very concept of heritage itself and its management policy over time.

Today, the new school heritage mangement involves a dynamic, local approach which takes a whole range of issues into consideration. The very meaning of the term heritage has considerably broadened from a narrow definition involving historical monuments to encompass natural environements and the protection of fauna and flora in the name of biodiversity. The trend has also shifted from conservation to management, effective presentation and sustained preservation.

Heritage has also become an economic, social and cultural issue whose future is no longer solely the remit of government authorities, associations and private individuals but an essential part of any decision-makers' development strategy.

Finally, and, above all, heritage is all about common recognition on a local, regional, national and European level. This phenomenon is even more marked in the Paris region whose citizens have manifested a strong desire to see their heritage not only recognised but, above all, treated with respect.

By devoting two issues of Les Cahiers to heritage in the Paris region IAURIF would like to demonstrate its commitment to this new approach in which it has enjoyed extensive assitance from the DRAC (Regional Department of Cultural Affairs) and the DIREN (Regional Environmental Protection Agency) whose CD Rom Paysages Protégés (protected natural environments) has been released to mark their publication.

This study is linked to the following theme :
Environment 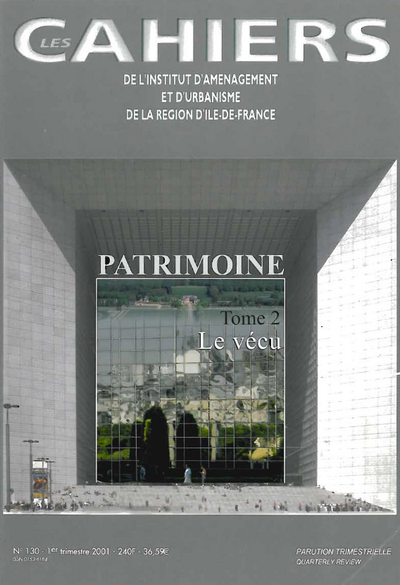 History has left its imprint on the Paris region lending profound unity to its rich diversity. Its identity is founded on harmony born from a blend of historical and contemporary beauty, bell towers and villages, glass and concrete, rivers and forests. A region of "capital" ...