Paris Ile-de-France, the French capital city region known internationally as the "Paris Region", remains relatively unknown.
On the basis of the latest available statistics, this report provides an overview of the Paris Region economy and describes its major transformations over the last 15 years.
Comparative international studies show that the Paris Region has a powerful economy on both a European and a global scale. It features a high concentration of companies of all sizes, large-scale  facilities and first-class infrastructures, universities and research centres, prestigious higher educational institutions and world-famous cultural and tourist sites. The region has more than six million jobs, i.e 22% of the national total. In some sectors, such as research and metropolitan area jobs, this percentage exceeds 40%. Such strengths contribute to its great attractiveness, as evidenced by foreign direct investments flows, its ranking among business and leisure tourist destinations and the inflows of economically active young people and students.
The value added generated by the Paris Region economy continues to increase, as well as its contribution to French GDP, i.e 31% in 2014. Among the capital city region's major assets highlighted by this study are: dynamic networks, a regional power of innovation, cultural creativity, a highly qualified labour force, top quality commercial real estate, industrial facilities and infrastructures. This attractiveness is supported by the reputation of the capital city, the development of internationally recognised hubs, such as the Paris Charles-de-Gaulle airport platform, the La Defense business district and the Paris-Saclay science and technology cluster. Less urbanised parts of the Paris Region also help to enhance the functioning, performance and diversity of the regional economy.

Over the last 10 years, two major factors have changed the Paris Region economy and its territories: the economic crisis and structural transformations.

Although the Paris Region showed more resilience in the face of the 2008-2009 global economic crisis than other French regions, the growth recovery in 2010-2014 was too weak to reduce significantly the unemployment rate and socio-economic insecurity.
Well-known structural shifts have continued to occur (globalisation, the development of the services sector, quality upgrading of economic activities and jobs, faster GDP growth than employment growth, etc.), while some new particularly powerful trends have emerged.

The world crisis and ongoing changes have also had an impact on the physical localisation of the economy in this large metropolitan area. This study has noted a "shift back" of the economy to the core centre of the region, after a period in the 1980s-1990s during which employment gains spread outwards to counties located in the outer suburbs. By contrast, between 2007 and 2012, more than half of the employment gains in the Paris Region occurred in counties adjacent to the core city of Paris. There are two explanations for this: first, the economic crisis lowered property prices in very well situated business districts, making them more attractive; second, major property development projects have been delivered in the northern and eastern inner suburbs of Paris, such as, for example, in the towns of Saint-Denis, Montreuil or the 13rd district of Paris.
At the same time, the new economy businesses favour facilities located in the urbanised and attractive neighbourhoods situated in the central agglomeration. The appearance of new sites in Paris such as “The Cargo” (an innovation platform dedicated to digital content and creative industries) or “l'Usine IO” (a fablab focused on helping SMEs to industrialise) are perfect illustrations of the growing capacity for accommodating start-ups.

In the year in which the Paris Region is drawing up its new economic strategy (which will be presented in the Regional Economic, Innovation and Internationalisation plan – SRDEII), what are the challenges it has to face?

On a regional level, the capital city region has to face several economic, social and environmental challenges: it has to confirm its resilience in dealing with unstable economic conditions; increase the wealth creation/job creation ratio; reduce unemployment (9% in 2015) and poverty (which affects 14% of the population and has spread to new categories of people); help reduce social and territorial inequalities; offer a better quality of life (housing, amenities, healthcare, mobility) and decrease reliance on energy and other resources as well as cut waste production.
On an international level, the major challenge is attractiveness. It is necessary to assert the Paris Region’s economic positionning in response to the initiatives taken by other major metropolitan areas in the world such as London or New York, but also by new entrants such as Berlin, Dubai or Shanghai. These megacities are investing heavily in innovation and are also directly threatening our positions as leaders in numerous more traditional sectors, such as leisure and business tourism, luxury goods or urban utilities.
Against a background of increasing complexity, the Paris Region must decide to master a set of human, technological and territorial skills in order to rise to challenges such as the ecological transition, digital transformation and the rise in entrepreneurship. The local areas that form part of the Paris Region are not passive and can actively contribute to the economic development of the French capital city region by undertaking local community-based actions. 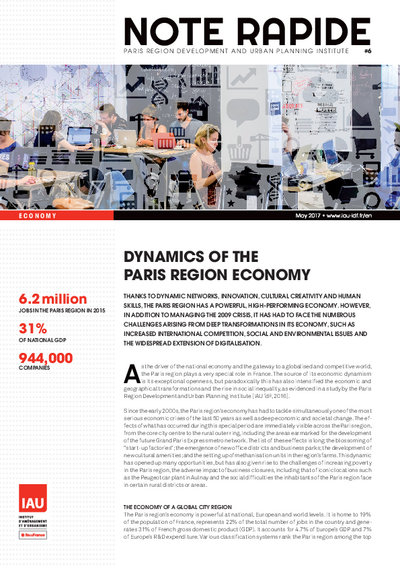 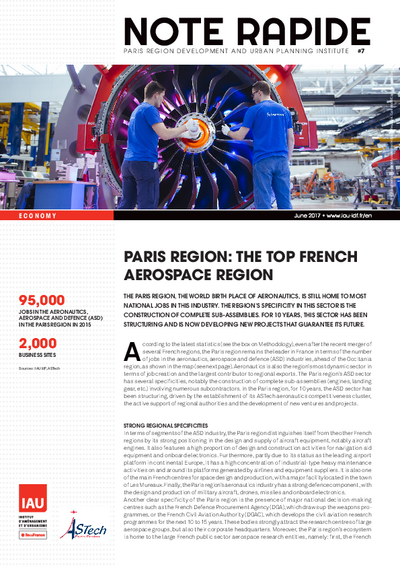 The Paris region, the world birthplace of aeronautics, is still home to most national jobs in this industry. The region's specificity in this sector is the construction of complete sub-assemblies. For 10 years, this sector has been structuring and is now developing new ... 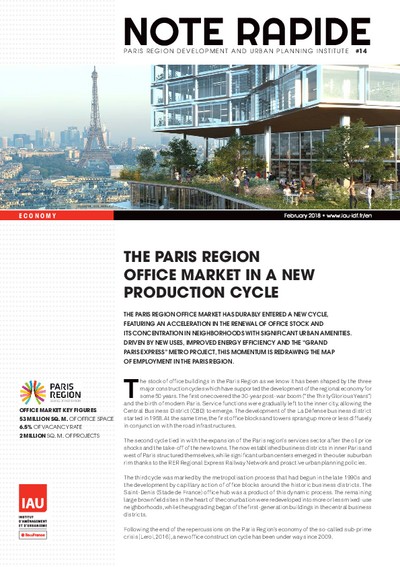 The Paris Region office market in a new production cycle

The Paris Region office market has durably entered a new cycle, featuring an acceleration in the renewal of office stock and its concentration in neighborhoods with significant urban amenities. Driven by new uses, improved energy efficiency and the “Grand Paris Express” ...

Spatial organisation and project's areas in the Paris region

Since the early 2000s, the Paris region’s economy has experienced deep economic and societal change: the blossoming of “start-up factories”, the emergence of new office districts and business parks, the development of new cultural amenities, the setting up of methanisation ...