Bogota: strategy and opportunities for a cycling city

This fourth publication on tactical urbanism is based on an interview conducted by L’Institut Paris Region in April 2021 with Andrés Felipe Vergara B. and Sebastian Posada Garcia of the Sub-Directorate for Bicycles and Pedestrians at the District Secretariat of Mobility (Secretaría Distrital de Movilidad) of the City of Bogota, capital of Colombia.

With 125 kilometres of street closures for bicycles on main avenues on each Sunday and an efficient cycling network of 590 total kilometres, the Colombian capital is one of the most cycle-friendly cities in South America. Since 2018, the city has even declared itself the Bicycle Capital of the World, Capital Mundial de la Bici1. When the health crisis hit Colombia in 2019, it only reinforced the ambitious cycling policy that has been in place for 40 years. Since then, a new temporary bicycle network has been added, completing the existing one, and new corridors dedicated to cycling have gained space from motorised vehicles. The people of Bogota have accepted cycling as a daily means of transportation.

The history of cycling policy in Bogota began 40 years ago, thanks to the pro-bike public policies of several successive mayors. With events and campaigns organised around the bicycle and the implementation of numerous cycling infrastructures, a real cycling culture was established in the city. Since the end of the 1990s, some mayors have even started to travel by bike, as Claudia Lopez, the current mayor of Bogota, is doing now. Previously a senator affiliated with the Green Alliance party, Claudia Lopez also fought for a change in the Colombian traffic code in 2016. It now encourages cyclists to ride peacefully on the road, by occupying a traffic lane and allowing two cyclists to ride abreast2.
Today, about 650,000 daily bicycle trips3 are recorded within the municipal boundaries, which represents almost 7% of all trips made per day4. Amongst students, politicians, women and men, and across all social classes, cycling is seen as an efficient and cost-effective means of transportation compared to motorised private vehicles or even to the often-crowded public system. While many people use cycling as a means of reaching the public transport system, it is also the only means of transport that people report using for their entire journey, especially poorer people. During the pandemic, the average length of bicycle trips increased from 6 kilometres before the crisis to more than 8 kilometres5. This shows that cycling has proven to be a real alternative to other means.

In the Colombian capital, cycling for leisure and daily use has existed for several decades, which is reflected in the choice of infrastructure.
Bogota has been a global pioneer in introducing temporary road closures to encourage cycling and physical activity. Initiated in 1974, thanks to the action of the association Pro-Cicla, co-founded by a professor of architecture (Jaime Ortiz), the Ciclovias were institutionalized in 1976, when he became advisor to the mayor. Since then, the city has organised the closure of 125 kilometres of roads, mainly on major avenues every Sunday. The management of the entire facility has been administered since 1995 by the District Recreation and Sports Agency (Instituto Distrital Recreativo y del Deporte, IDRD) with the support of other departments. Ciclovia welcomes up to more than 1.5 million people every week: pedestrians, cyclists, joggers, skaters, and so on. Every week, a part of the city becomes a boardwalk for one day out of seven. Today, the Ciclovias model is a reference in municipal mobility and health and recreation policy that has been replicated in many cities around the world6. For many inhabitants of Bogota, the Ciclovia was their first positive experience cycling.

From 1995 onwards, successive mayors also began considering the bicycle as a daily means of transportation. Little by little, a cycle network (Red de Ciclorrutas) was developed, allowing safe routes through the city. Construction of the routes began in 1998. Today, this network has more than 590 km of permanent cycle paths, mainly consisting of cycle tracks (Ciclorruta). Initially placed on sidewalks, since 2012, new lanes have also been installed on roads, with physical barriers separating bikes and cars.

When experience is a strength in responding to emergencies

Originally created for leisure and events, it was the simplicity of the Ciclovias that convinced the municipality to use the tool of tactical urbanism to provide a pragmatic response to the health crisis, starting in March 2020. In order to reduce pressure on integrated public transport routes (SITP) and the bus rapid transit network (TransMilenio), the city proposed to offer cyclists temporary additional infrastructure on the road, similar to the Sunday Ciclovias. This time, the roads were not completely closed to car traffic, but simply reduced by one or more lanes dedicated to cyclists. This required the installation of safety cones or barricades to clearly demarcate the space reserved for bicycles. Certain gaps in the permanent bicycle network were resolved by these temporary infrastructures. Four entities - The District Secretariat of Mobility (Secretaría Distrital de Movilidad), the national police, the District Recreation and Sports Agency and TransMilenio – were mobilised to guarantee the management of these new Ciclovias temporales (temporary cycle paths) seven days a week, in order to ensure the day-to-day implementation of temporary infrastructures and to provide staff to guarantee the safety of cyclists on these new corridors.
In March 2020, about 117 km of temporary bike paths were completed within one week. After being drastically reduced and then increased again, a network nearly 84 km long of temporary cycle paths were finally completed in the summer of 2020. Today, the city is in the process of transforming these temporary paths into permanent bike lanes. By spring 2022, around 32 km had already been made permanent. In some places, additional traffic lights or signs have been added for increased safety.

The need to evaluate and quantify to justify, prioritise, and move forward!

One of the major effects of the pandemic on cycling policy has been the opportunity to implement cycling facilities on roads heavily used by motorists. Previously, they were considered too difficult to transform. Some of the temporary schemes have functioned like pilot projects with the aim of transforming major road arteries into corridors for multi-modal transportation, proposing a more just redistribution of the space.
The changes that have been made have not been without their drawbacks (e.g., political opposition, theft of equipment, use of the facilities by motorised two-wheelers), which has made it necessary to demonstrate that cycling is a means of transportation that is as efficient as, or even more efficient than, driving motorised vehicles. The District Secretariat of Mobility therefore began focusing on monitoring the use of these facilities, which revealed that certain corridors needed more attention. This work led to:

Today, one of the city's objectives is to work on a sustainable transformation of these corridors. By providing safe and comfortable cycling and pedestrian facilities, the city intends to improve the attractiveness of public spaces and environmental quality while reducing the high accident rate. Thanks to the massive use of the temporary facilities, it has been possible to justify their sustainable transformation with permanent materials. In 2023, a large mobility survey will be conducted by the District Secretariat of Mobility that will allow the city to better evaluate the impact of recent changes on the citizens’ mobility patterns.

Transforming the city sustainably for cycling, a long-term political and civic project

Despite problems of vandalism, under-utilised lanes, and tensions between users in some areas, the temporary cycle tracks have allowed rapid progress to be made in establishing a complementary biking network. Bogota's tactical experience has also led to a profound transformation of some major roads (such as Avenida Calle 137) into mobility corridors, providing more space to cyclists and pedestrians.
With little topography within most of the city limits, and a temperate and stable climate throughout the year, conditions in Bogota are favourable for cycling. In addition, there is a high level of citizen participation and mobilisation in favour of cycling, which is particularly evident in the context of events and demonstrations. But as the mayor’s last three terms have shown, with a real revival of cycling on the political agenda, it is ultimately the strong political leadership of the municipality that has driven these changes. In February 2021, the municipal government announced the biggest bicycle programme in Bogota's history, allocating almost 2.2billion Colombian pesos (around EU490m) to bicycle projects until 20399.

Paul is Senior Planning Expert at the Institut Paris Region. He works on metropolitan strategies and urban projects in Greater Paris and worldwide. He has initiated innovative projects such as the “Avenues métropolitaines” and “Parc des Hauteurs” programmes. Among his interests are the catalysts of urban and ecological transformation; the landscape; mobility; and public space development. He has co-edited several books on changing cities, including “Cities Change the World” (2019). He lectures in urban strategies as part of the urban planning curriculum at Sciences Po (Paris).

1. https://www.movilidadBogota.gov.co/web/node/1879
2. Although the previous law did already allow cyclists to occupy a full lane prior to the amendment in 2016, the District Secretariat of Mobility recommended riding in single file until then.
3. https://planbici.com/Bogota/
4. https://www.movilidadbogota.gov.co/web/plan_bici
5. For comparison, in Paris the average length is about 2.2 km (2010).
6. Buenos Aires, Cape Town, Mexico City, Jakarta, Sao Paulo, Santiago de Chile, New York, Los Angeles, Lima, Melbourne and Paris... a large number of American cities and cities around the world regularly transform their streets into Ciclovias. They often carry different names and are not organised on a weekly basis.
7. The example of the recent 3.6-kilometre cycle track on Avenida Calle 13 shows how important the road’s transformation is for active mobility. Made permanent in 2021, this new infrastructure allows many users to use this route safely. In 2021, more than 7,000 cyclists were counted every day during peak hours, which is an increase of 285% compared to the pre-pandemic situation on this section of the road.
https://planbici.com/alcaldia-de-Bogota-avanza-en-la-implementacion-de-la-ciclorruta-de-la-av-calle-13/
8. EUR492,214,044 according to exchange course on 02/18/2022 (exchange-rates.org)
9. https://bogota.gov.co/mi-ciudad/movilidad/presentacion-politica-publica-de-la-bicicleta 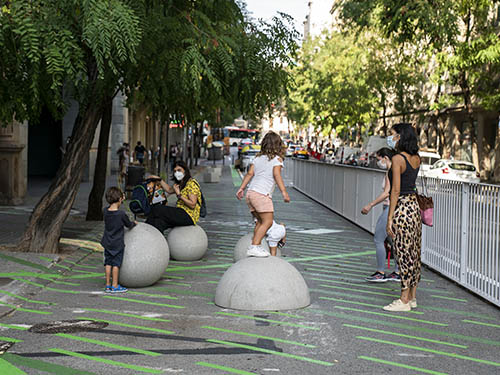 Barcelona capitalizes on its tactical experience to transform its public space 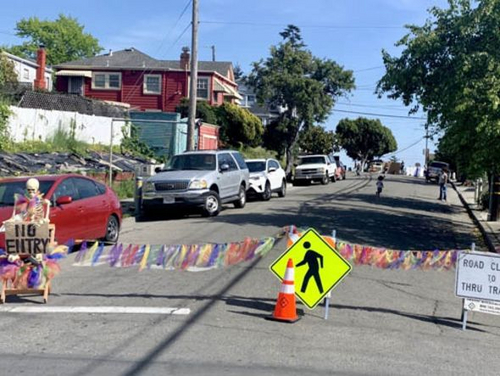 Oakland, New York: when the tactical approach reveals the importance of dialogue with local communities 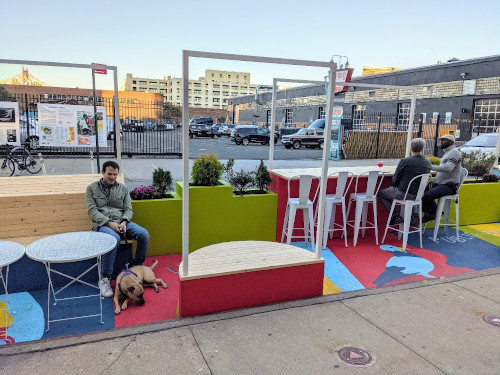 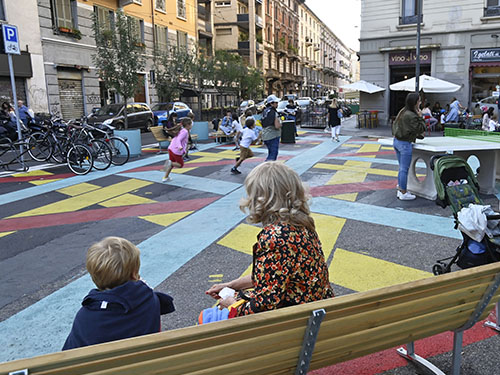