The World Cities Culture Report 2012 is a major global initiative on culture and the future of cities, set up by the Mayor of London. The level of detail of the cultural data collected across the cities is unprecedented, and represents the primary achievement of this research.

In the era of globalisation, world cities are increasingly competing with each other, rather than with other cities in their countries, for such things as the headquarters of multinational firms, or the right to host major international sporting and cultural events. In the globalised knowledge economy, having a well-educated workforce is the key to success, and such workers demand stimulating, creative environments. It is clear from partner cities’ responses that they are well aware of culture’s role in making their cities attractive to ‘talent’. A rich and vibrant culture thus also becomes an indirect source of economic success. This is recognised by cities in emerging economies as well – from Shanghai to Istanbul to São Paulo there is a belief that culture will help determine their city’s future economic success.

Culture is at the heart of public policy in world cities

New York recognise that culture plays a major role in developing their metropolitan strategy. In Johannesburg, efforts to build social and community cohesion in the wake of apartheid have been strengthened by the development of a new heritage infrastructure that tells the history of all South Africa’s peoples. In the very different context of Shanghai, culture is viewed as a source of cohesion in a city that is changing incredibly quickly. In Tokyo meanwhile, culture has been seen as an important response to the challenges posed by the 2011 earthquake, an event that has led to much soul-searching in Japan about the country’s future direction. In London and Paris the creative industries are seen as a potential source of new jobs and growth at a time of economic difficulty. Cultural activity is also an important tool in urban regeneration – New York stresses its importance in helping to revive run-down neighbourhoods.

World cities, by virtue of their scale, dynamism and diversity, are the cities most able to support the widest range of cultural activity. Their large audiences constantly changing make the world cities hubs of new cultural ideas and knowledge, and also great centres for ‘hybridised’ art forms, created when ideas are blended together. The report’s findings make clear that the world cities play a crucial role in global culture.
The conclusions of this report is that culture is essential to a thriving world city. They will help participating cities identify common action that will lead to mutual benefits and secure long-term, efficient and sustainable development of their cultural sector. 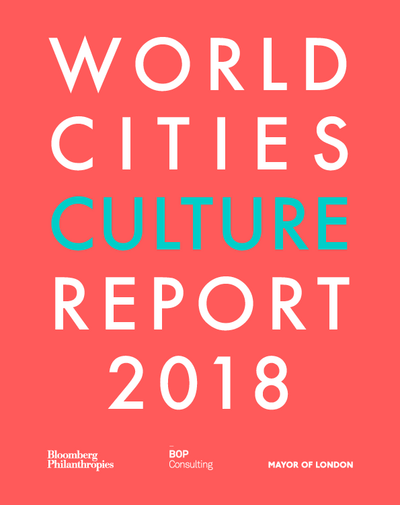 Cultural and city leaders from 32 major global cities around the world came together in San Francisco from the 14th to the 16th November 2018 to show how cities are tackling the issues they face with cultural policies and share best practices. The theme of the conference ...