Transportation is a key factor of dynamism and quality of life in large cities. Because of that, there can be no pause in investments in that area. Ile-de-France is so particularly aware of the fact that the Region and Government have just decided to implement a "département" supported programme in excess of 30 billion francs to expand their networks in the next 7 years. However crucial, such growing offer alone cannot prevent the congestion and congestion-related nuisances, that threaten our large cities. Public transportation needs to be made more attractive, safer, accessible to all, and needs to be freed from traffic jams, if it is to provide a credible alternative to private cars. Walking or biking are perfectly suited to short distance trips, by far the most numerous, and as such should become pleasant and convenient again. In addition, the future needs to be anticipated, by choosing the least travel-generating city-planning solutions. The transport and delivery of goods are taking an ever-growing place in the life of cities, and this aspect should be taken into account in the thinking process, regardless of what has often been the case in the past.

These issues are not specific to our region, as demonstrated by both the issues of Les Cahiers that IAURIF is dedicating to transportation in large cities, describing how other cities tackle these problems.

This first issue will deal with institutional issues. In most cases, the Government is still mainly responsible for organising public transportation. This approach appears to be less and less suited to current transportation challenges, which cannot be handled separately from other areas of city policies handled by local authorities. In this respect, the example of London is instructive: the new regional authority will have broadened responsibilities in transportation matters. The change has begun in Ile-de-France, and the Regional Council will be joining the Paris Transportation Union in the near future. However, we cannot stop at that. Transportation in our region cannot remain the casualty of decentralisation. The Region, the departments and city syndicates should be able to contribute, each at their own levels, to an efficient, environmentally acceptable and socially fair transportation system.

This study is linked to the following theme :
Mobility 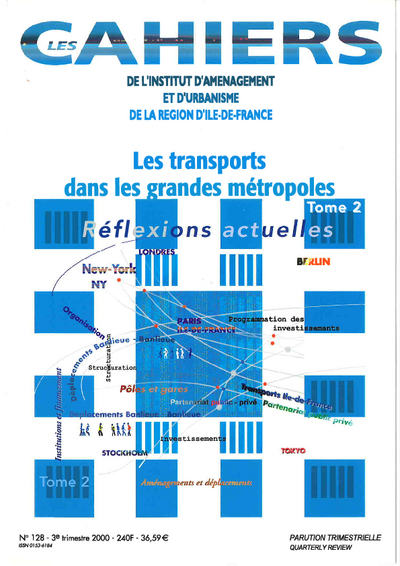 Transportation in large cities: for an overall strategy

The purpose of this second issue of Les Cahiers dedicated to transportation in large cities is to describe the trends in those cities' policies. The goals are not entirely new: developing public transportation and reducing road congestion are unquestionable concerns, as it ...