The third places in the Paris region

In 2017, the number of third places reached 620 in the Paris Region, comprising 171 coworking spaces, 146 shared offices, 87 fab labs and 216 business creation or development support sites. There is a sharp imbalance between central and rural areas: over half (323) of the third places are located in Paris, notably in the central district and the north-eastern inner districts where rents are lower and where a large population of freelance workers in the Web live. For the same reasons, a large number of third places are located in cities very closed to Paris such as Montreuil, Saint-Denis, Saint-Ouen, Boulogne, Issy-les-Moulineaux, Arcueil or Vincennes. In the outer suburbs, 125 third places have been identified, mostly in the Yvelines county, which hosts 47 third places scattered across several towns (Les Mureaux, Versailles). There are 36 third places in the Essonne county (Évry and Palaiseau) and 20 in the Val-d’Oise county . The county of Seine-et-Marne brings together 22 third places (Moissy), spurred by the County Council’s favourable policy. 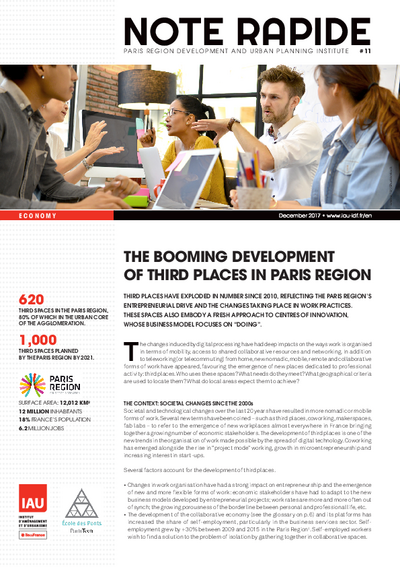 The booming development of third places in Paris Region

Third places have exploded in number since 2010, reflecting the Paris Region’s entrepreneurial drive and the changes taking place in work practices. These spaces also embody a fresh approach to centres of innovation, whose business model focuses on “doing”. […]  ...