Lessons from the 1998 World Cup

The Stade de France, a new multi-use venue built for the Word Cup 1998, was used as a powerful driver in the regeneration of the Plaine Saint-Denis area, 750 hectares of industry and brownfield immediately to the North of Paris. This was made possible because the local authorities had gradually built up, since the mid-80’s, an economic and spatial vision of the future they wanted for the area, formalised in the Projet Urbain (1991).
Nine years after the Cup, a lot has been achieved in terms of mix-use development (over 1 million sq m. built since 1996), jobs recovery (+20,000 jobs), housing (+4,000 units, 40% social), an improved public realm and new facilities, but more remains to be done in the future with more development and transport projects being planned for the 2008-2020 period within this area and at a wider scale : that of the Plaine de France area stretching 25 km from Paris to the Charles-de-Gaulle International Airport. The presentation shows how the project was, is and will continue to be delivered. It also draws some lessons seen from a planning and a project governance point of view.

This presentation on the impact of Word Cup 1998 on the regeneration was first shown and discussed in Johannesburg, South Africa in the course of an International Seminar of Experts on development and spatial strategies for the City of Joburg and the Province of Gauteng.

This study is linked to the following theme :
Urban planning 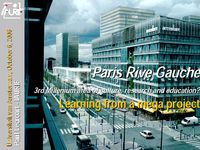 Learning from a mega project

Paris Rive Gauche (1990-2020) is one of the most outstanding urban developments in the Paris Region aiming to focus regional development towards the East. Along the banks of the Seine, on the edge of the City, a series of railtracks are being covered since the mid-'90s to ...