Science and Technology in the Functional Urban Regions in Northwest Europe

In an economy where knowledge is becoming increasingly important (OECD, 2000), science and technology stimulate economic development, job creation, the improvement of products and services as well as public health initiatives.

Three quarters of the international community’s investment in R&D is made in North America (37%), Europe (28%) and industrialized Asian countries (20%)

Such activities are principally concentrated in the economies of industrialized companies, where they play a fundamental role in the economy of major metropolitan areas such as Paris, London, Los Angeles and Tokyo. In fact, ¾ of the international community’s investment in research and development1 is made in North America (37%), Europe (28%) and industrialized Asian countries (20%). However, these three groups of countries represent only 61 % of the world’s GDP and less than ¼ of the global population.

Scientific and technological resources are very unevenly distributed in Europe

The Functional Urban Regions in northwest Europe (FURs) with over one million inhabitants represent 17.2% of the population, 17.6% of jobs and 28.6% of Europe’s GDP (the 15 member countries in the EU). Six regions in particular prevail over the 13 overall regions. The economic region of Paris leads in both scientific and technological performance, followed by London and Rhein-Ruhr. While London demonstrates the best scientific performance in Europe, it ranks lower in technology. In contrast, the technological performance of the Rhein-Ruhr region is comparable to that of Paris. Randstad-Holland and Rhein-Main are next in line, with Randstad ahead of Rhein-Main in scientific performance, but behind the latter in the field of technology.

Between 1990 and 1998, the FURs underwent a relative drop in performance

The proportion of articles published in the 13 regions fell from 31.4% in 1990 to 26% in 1998. Likewise, the percentage of registered European patents decreased from 24.8% in 1990 to 23.4% in 1998. In both cases, the decline is attributed to a slowdown in the number of articles published and registered patents among the FURs compared to the rest of Europe. This reflects a wider spread of science throughout a number of major European poles, and increased performance in Southern Europe, Finland, Ireland and certain Landers in former East Germany. In the field of technology, significant developments are observed in the Nordic countries, to the detriment of the strongest regions with the exception of Stuttgart and, more recently, Munich. 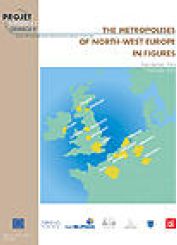 The Metropolises of North-West Europe in Figures

One of the aims of the GEMACA II project is to produce comparative data on the economic evolution of the metropolises of north-west Europe. A selection of the data gathered on 14 metropolises is presented in this document. It is original and innovative in that it covers ... 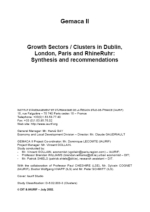 This study was conducted in the framework of the GEMACA II project (Group for European Metropolitan Areas Comparative Analysis, second project), which addresses the competitiveness of the major metropolitan areas in Europe. The different works were made possible thanks to ...