Summary of the GROOVES study

Thirty-six roofs of different types (extensive, semi-intensive and intensive) were analysed via inventories of plants and invertebrates (including pollinators) and substrate sampling, to gain a better understanding of their status and their ecological role. After three years of study, early results have confirmed the role played by green roofs in hosting biodiversity and fulfilling ecological functions. They also show that these benefits vary greatly between different planting systems, and this makes it possible to outline some major trends for roof designers and managers.

This study is linked to the following theme :
Environment 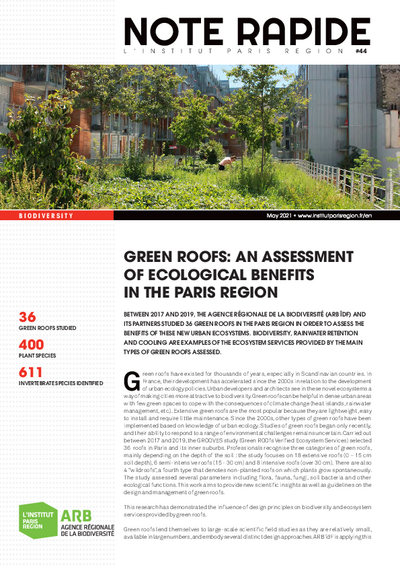 Green roofs: an assessment of ecological benefits in the Paris region

Between 2017 and 2019, the ARB IdF (Paris Region Biodiversity Agency) and its partners studied 36 green roofs in the Paris area in order to assess the benefits of these new urban ecosystems. Biodiversity, rainwater retention and cooling are examples of the ecosystem services ...